With cannabis stocks, investment, and legal initiatives rising around the country, the demand for skilled workers is about to soar. This week, a nationwide series of free legal clinics aims to meet that demand, and start repairing past harms, by helping on-the-record cannabis veterans get back in business.

During the week of October 20 — 27, 2018, over 20 organizations around the country have joined forces to host the first-ever National Expungement Week (NEW), designed to help those most impacted by the US war on drugs to leave their outdated convictions behind, and move on with their careers.

Throughout the week, organizations will offer free legal clinics to help remove, seal, or reclassify eligible convictions from attendees’ criminal records, as well as immigration advice, health screenings, enrollment social benefits, and Get Out the Vote support, depending on location.

Over the past year, numerous data points have confirmed that US marijuana arrests continue to be the burden of communities of color almost exclusively, despite consistent usage rates across ethnic groups.

As social activists and researchers have frequently established, such arrests often lead not only to incarceration (with its direct harms) but also reduced work or school opportunities, lower quality of life, and many other multi-generational setbacks.

In the legal cannabis industry, where numerous state or local regulators have sought to bar individuals with criminal convictions from participating. it has also led to a growing bottleneck between skilled, indeed industry-building cannabis veterans and the nacent legal market. 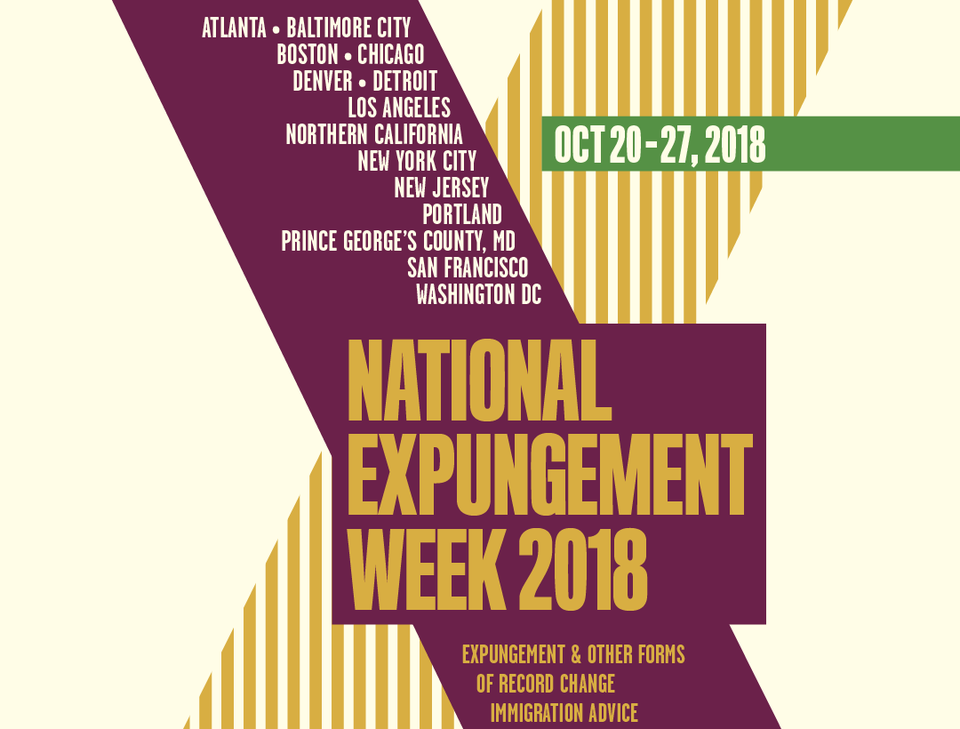 Expungement Fairs are scheduled this week in the Atlanta, Baltimore, Boston, Chicago, Denver, Detroit, Los Angeles, New Haven, Philadelphia, Prince George’s County, San Francisco, and Washington, DC areas, though many of the organizations involved offer record-expungement and other legal advice throughout the year.

One of NEW’s main organizers, the Equity First Alliance, has also launched an online Expungement Fair toolkit so that interested parties or communities may host their own record-clearing events at any point.

Sonia Erika of the Massachusetts Recreational Consumer Council, as well as an Equity First Alliance spokesperson, commented in a statement, “Now that the plant is becoming legal, those who have gone to jail should be able to clear their record. The process for changing one’s record varies wildly state-by-state, but the need is universal.”

Erika continued, “Considering America’s history of the war on drugs, the cannabis industry must bring justice and shared profits. As these expungement events become more common, we wanted to coordinate them to highlight the need for widespread and automated legal relief.”

Tamar Todd, director of the Office of Legal Affairs at the Drug Policy Alliance, pointed out by phone and email that a growing number of states have, in light of cultural and legal changes, taken steps to walk back cannabis convictions; however, the process has mostly required individuals themselves to do the foot work.

“While a number of states, including Oregon, Colorado, and Massachusetts, are allowing people with prior cannabis arrests and convictions to seal and expunge their records, California just recently became the first state to ease the burden on individuals by making those retroactive changes automatically, [which] will enable thousands of more people to move forward with their lives and to seek new employment and business opportunities in the cannabis industry and elsewhere.”

The full list of National Expungement Week events can be found here, as well as links to host organization