On October 17, 2018, Canada will become the first G-7 Country to allow citizens to consume recreational marijuana. This is the fulfillment of a campaign promise of Prime Minister Justin Trudeau as well as the culmination of the cultural normalization of cannabis that has been ongoing since medical marijuana was approved in 2002. While this is a tremendous event for the cannabis industry in Canada, it is by no means the end of the story and it is fair to say that trends across the globe would indicate that Canada will not be alone in legalization for very long.

For many of our readers, the trend in the United States is personally the most pertinent. We have discussed why we predict that the US will likely not be far behind Canada here. We will not rehash the feedback loop that is in place in the US and, in our opinion, leads towards more relaxed views and laws concerning cannabis. However, similar trends in voter perception, political willpower, and legislature construction that we see here in the US are present in countries worldwide.

Medical marijuana is an early sign of the change in the view of cannabis. As we discussed in our prior article, medical marijuana normalizes the social view of cannabis from a drug that is inherently dangerous to a medicine that is possibly safe for recreational consumption. When we look at US law, the Controlled Substances Act designates cannabis as a Schedule I drug, meaning that it has “high abuse potential, no medical use, and severe safety concerns”. This attitude towards cannabis severely limits the ability of doctors, researchers and drug companies to explore the possible benefits of the wide array of psychoactive chemicals in the plant and then optimize them for specific patient benefits and outcomes. The legalization of medical marijuana and cannabis-derived drugs represents a significant change in thinking for the societies that have chosen to allow its consumption by patients. Then, as patients see benefits and more research is done, the concerns on the potential for high abuse or severe safety concerns come into question as well, thus opening a path to recreational marijuana over time. 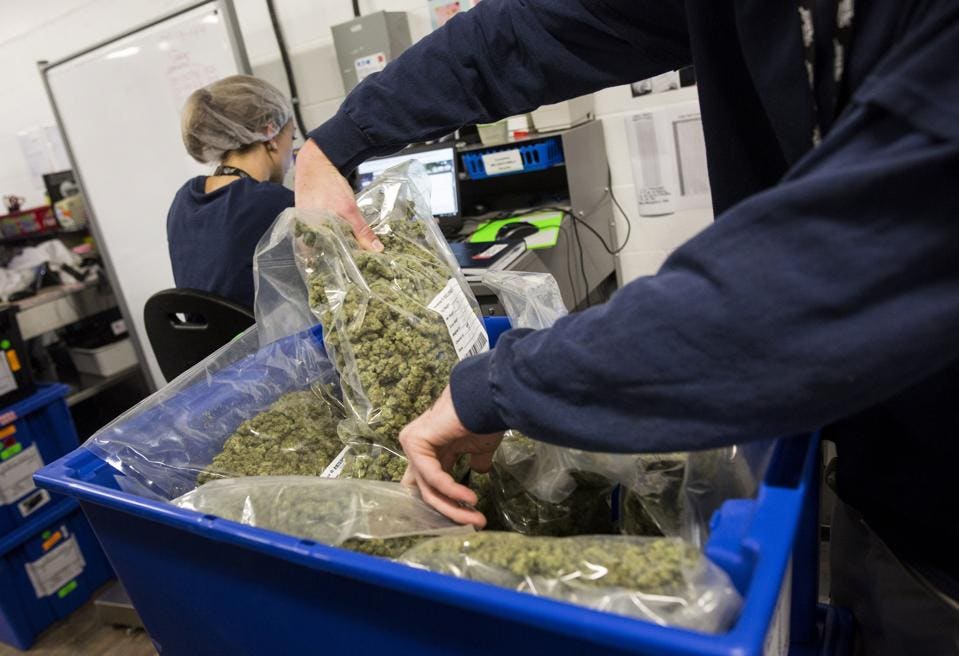 An employee sorts bags of marijuana for shipment at the Canopy Growth Corp. facility in Smith Falls, Ontario, Canada, on Tuesday, Dec. 19, 2017. Canadian medical marijuana is setting the stage to go global. The country’s emerging legal producers have a chance to seize opportunities in other countries that could make them worldwide leaders, according to Canopy Growth Corp. Chief Executive Officer Bruce Linton. Photographer: Chris Roussakis/Bloomberg

Medical Marijuana and the path to recreational cannabis is by no means only a Canadian phenomenon. The trend towards legalization is apparent across the globe with the possible exception of Asia. As we said, medical marijuana seems to be the path by which societies have been normalizing the use of cannabis. Germany realistically legalized medical marijuana in 2017 and allows patients with a prescription to use marijuana. German demand has been so high that the government is working to increase Canadian imports so patients do not have to pay higher costs. Australia legalized medical marijuana in 2016, though the process to obtain it is rather difficult. Italy approved medical marijuana in 2013 and the Italian Army, who is responsible for production, has been unable to keep up with demand prompting access to be granted for Canadian cannabis there as well. Globally, additional countries have legalized the use of cannabis-derived drugs and oils. In total, 39 countries allow medical marijuana or cannabis-derived drugs. That does not include the United States where marijuana is illegal at the federal level but 31 states have approved medical use and 15 other states allow cannabis-derived oils of some form or another.

This global opportunity is the reason Canadian cannabis companies are trading at high valuations. The top 4 cannabis companies by market cap are valued at over $30 billion. The explosive growth of cannabis stocks is not simply due to the opportunity in Canada starting October 17th. It is the global opportunity that is developing and Canadian cannabis producers are at the leading edge of supply to this growing global market. As we said above, there are 39 countries that allow medical marijuana or cannabis-derived drugs. The future global market for cannabis is in these countries that are on the path towards greater legalization. As it stands today, there are 1.29 billion people in the world who live in countries that have relaxed their cannabis laws in some manner or fashion. That is a lot of future consumers.